To be honest, all this studying really wears on one more than I expected. I mean, it's taking me several more hours of burying my head in a book each day than I had hoped for, to stay on schedule. I could go on and on about all the psychological and emotional stress of medical school and preparing for this scary exam, but I'll save that for another day.

Instead, I will tell you about the inspiring hour-and-a-half that I spent studying at the Freiburg University. I needed a change of scenery and decided to go into the city with Ian for his evening lecture on Heidegger. What makes it so very cool, is that this lecture happens to be going on in the very same classroom that Martin Heidegger used to lecture in himself. I know, this isn't very exciting for somebody who doesn't know much about this philosopher - or anything, for that matter, as I certainly would not if it weren't for marrying a philosophy student. Suffice it to say that many would consider him the greatest philosopher of the 20th century. 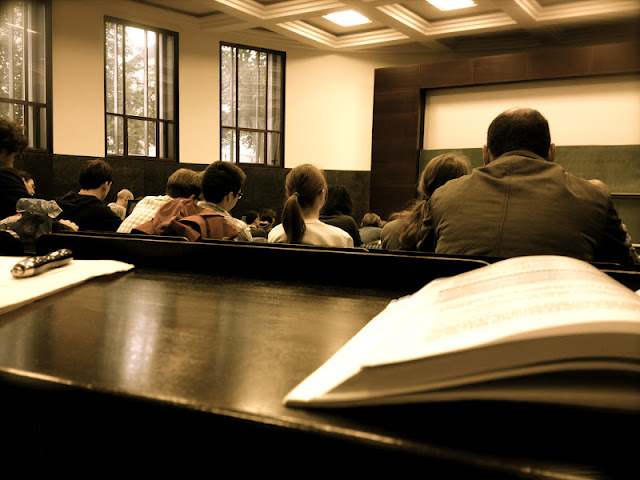 A lecture at Freiburg Universität was, indeed, everything I had hoped for. The classroom slowly filled with young grunge-hipsters of the German sort and overly-composed retired intellects, quite the contrast to say the least. Finally the professor entered, with a boyish smile and a head full of windswept gray hair, flirting with his scandalously young girlfriend as he approached the lectern. He fit the bill perfectly - his glasses with thin round frames did nothing to hide his frequent left-sided facial tic; his stylish and well-fitted tweed sport coat (handkerchief and
all) was offset by the rather less-stylish wide navy blue tie and basic button-down.

Of course, I could hardly understand what he had to say, so I read about endocrinology. But I managed to notice that the room was engaged and entertained enough to offer the occasional chuckle at his anecdotes. The lecture was concluded not with applause, but with a chorus of rapping knuckles on the desks.