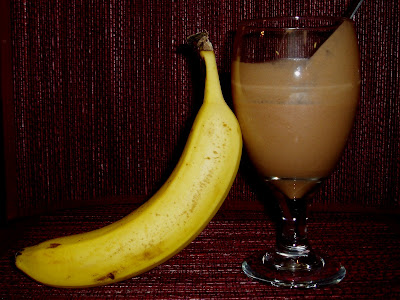 I first became interested in the blogging phenomenon when I found a few incredible blogs (see the list of who I'm following) with delicious recipes, beautiful photos, and lovely writing. I have taken much inspiration from these blogs and finally decided that maybe I could do something like that too. I am terrified by trying to take pretty pictures of food - it is so much more difficult that I would have thought - but I intend to try. Until I got married less than 2 years ago I had little interest in cooking. Eating, sure. But cooking never did much for me. My mother is still surprised when I tell her about all the interesting recipes I've tried recently. I guess I decided that I have to eat and I like to eat good, healthy, whole foods, so I should learn how to make them myself. Since then cooking has become one of my greatest hobbies.  At times cooking is sort of a creative outlet for me; at others it is a time when I can relax and enjoy following somebody else's instructions rather than worrying about what I need to do next. In some ways it reminds me of when I worked in a neuroscience laboratory. There is a certain peacefulness to following the rules and standard methods, but every now and then inspiration strikes and you may stumble upon something really great. Unlike research, the end result is almost always satisfying, and you don't have to work for years in order to reach it.

This smoothie has become a favorite evening snack for me, but it would be appropriate for any time of day and would probably make a great breakfast. It is a very healthy alternative to ice cream and really is good enough that you won't want any ice cream. It does take a little bit of planning, because you have to freeze the bananas ahead of time, but they give this smoothie a perfectly creamy texture. I always buy a few extra bananas and when they are nice and ripe I break them into about 1" pieces and store them in a plastic bag in a freezer, that way I always have some ready to go.

1. Combine the bananas and milk in a blender. The bananas tend to stick together and get caught in between the blades, so you may have to break them up occassionally with a metal spoon.
2. Add the remaining ingredients and blend until smooth.

This is so easy that I don't usually measure the ingredients at all. You really can vary it a lot, too. It could easily be made dairy-free by substituting soy or almond milk. If you are allergic to peanuts (or just don't like them) it's good without the peanut butter. Starting with just the bananas, milk, and cocoa I have also added a few drops of peppermint extract and some chocolate chips. This makes a great mint chocolate chip shake. It's also good with some irish cream!

[In case you are wondering about the name... it is the first name of a twentieth century scholar of ancient and medieval philosophy. My husband was telling me about this man one night while we were drinking this smoothie. I just couldn't get over the sound of his name and now that's what we always call this smoothie.]

I know that many people in the Northeast must be annoyed by all the recent snow, and my sister in Nebraska is just sick and tired of it, but coming from Denton, Texas I have to say: Yay! It's snowing! It has been snowing all day long, and it's going to keep snowing all night. I mean really snowing. There are several inches of snow on the ground. I have never seen it like this here - it's so beautiful! This morning I walked to class only to find out that it was canceled (we Texans don't know how to handle this kind of thing), but it was so much fun to see everything covered in snow that I went back home to get my camera. 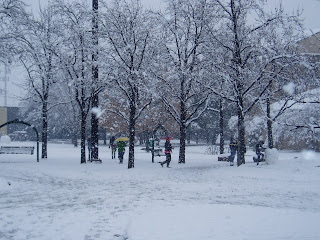 It's amazing how the campus was transformed - it was filled with the sound of children. Well, actually, there were no children but it was filled with that amount of joy and laughter. Even the few professors I saw had a hidden smile and a gleam in their eyes. At first I noticed people walking around with a snowball in their hand, just in case they saw somebody that looked like a good target. After a few hours there were large snowball fights going on throughout campus.  There were snowmen of all shapes and sizes scattered throughout campus (one of my favorites held a sign that said "I love global warming.") Some students stopped  to pose with thier friends for a photo in front of the Administration Building or library fountain.  A diesel pick-up truck made figure-eights in an empty parking lot. Everybody was so friendly. Usually we all just rush from one building to the next, barely noticing the people around us. But today everyone looked at me and smiled as if to say, "hey, isn't this great!?" 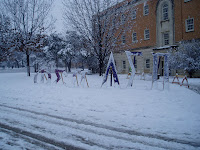 An extra note about those snowmen - there was also a phallic one in front of the fraternity houses. "True to the university frat. culture," I said to my husband, rolling my eyes. But he, the philosophy student, had a different interpretation. Here is his story: ancient Greek gods were often depicted with a large erect phallus. A prominent Athenian statesman and general named Alcibiades was accused of desecrating pillars with depictions of Hermes by breaking off the phalli. The city decided to delay trial so that he could continue on his planned voyage, defending the city of Athens against the Sicilians city. While he was gone his enemies within the city were emboldened and plotted against him. Suspecting an unfortunate fate Alcibiades did not return to Athens. Rather, he went on and became an advisor to the Spartans, ultimately leading to the fall Athens. --- So perhaps these modern "greek" brother were just trying to bring back the ancient culture, a sort of Athenian revival.

When I came home from work in the evening it was still snowing. I stood by the car for a moment, alone, admiring the beauty, and the silence which allowed me to hear the snow melting from the rooftops.  I knew that by Saturday it would be 50 and sunny.
No comments: 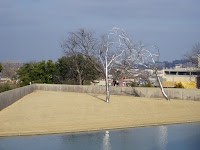 This weekend I visited the Fort Worth Modern art museum. I don't know much about art beyond an introductory art history course, but I have always loved viewing it. I find it to be a wonderful catalyst for relaxation and thought. The architecture of The Modern alone provokes many questions. The majority of the interior rooms are traditional rectangular rooms with white or gray walls, but around the border of the building are rooms with walls made of glass, allowing sunlight in and a view of the outdoors. Walking from an inclosed room to one with only a single solid wall is quite a contrast, and it made me very aware of the extent to which my surroundings affect the way I see a piece of art - or anything else for that matter.  If there had been flowers blooming and leaves on the trees outside, I probably would have seen more hope and life in the artwork in these rooms; if it had been storming, more gloom or wrath. 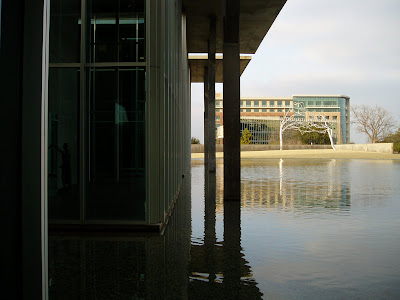 This phenomena also made me wonder why we tend to separate art from our surroundings and our daily lives? Most people would agree that art is a good thing - we derive pleasure from its beauty and it allows us to reflect on the state of our present world, learn about the way the world used to be, and contemplate the way that others see the world. It seems to me that not only do we separate these objects by placing them in special buildings, but that on a daily basis we also overlook the things they represent.  This is what I intend this blog to be about: recognizing the art that exists all around us, the sublime in the ordinary, the beauty in the everyday.  I don't think that these things are hidden from us, but rather that we need only take a minute every now and then to recognize them.  This is my attempt to be mindful of beauty in my own life.  I hope it will help you to do the same.
No comments: