Since I began medical school, I have become increasingly interested in the way that medicine infiltrates the rest of the world, especially the arts. So, when I went to the Chicago Museum of Contemporary Art, I was initially impressed by the Luc Tuymans exhibit, and then enthralled when I came to a series of paintings titled Der Diagnostische Blick. This is the name of a German diagnostic manual for physicians, which contains photographs of people with various diseases. The MCA had 4 paintings from this series on display: legs with eczema, a woman with anemia, a man with a facial droop, and a breast with signs of cancer.

The ideas behind these paintings, or rather, triggered by them, are pertinent not only to art but also to the practice of medicine. These images are based on photographs that were intended for instruction; therefore the people that posed for them are in fact insignificant, mere bodies. When Tuymans painted these images they lost all instructional value - his dabs of paint will not help me to recognize the defining characteristics of eczema. Yet the people are still reduced to mere bodies, maybe even less. Tuymans uses horizontal brush strokes, creating a distancing effect such that the viewer is unable to feel that he can understand what this person is thinking or feeling. Devoid of both life and instructional value, what is left? 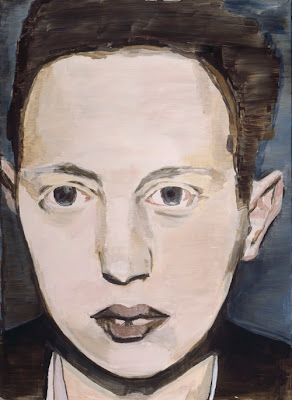 In an interview Tuymans said, "I take all the ideas out of individuality and just leave the shell, the body." This is evidenced in his portrait of St. Ignacious Loyola, based on a photograph of the saint's death mask. Der Diagnostische Blick is also a series of de-individualized bodies. Now I must ask myself, when we diagnose people with an illness, do we leave their bodies behind as empty shells? Does that diagnosis reduce the body to another in a long list of bodies that could be photographed and placed in a diagnostic manual?  I think it is important that we  consider this, and what can be done to prevent it.

Another way to think about these paintings is not as a representation, but as an example of illness. These paintings, overlooking reality, are themselves lacking something vital. In so many areas of life it is easy to reduce a situation to a snapshot, forgetting to consider the whole person, overlooking the other people affected, or maintaining a very limited perspective on life. In fact, the evening I went to this exhibit I stepped onto the train worrying about whether or not I was doing all the "right" things for my future, and feeling a twinge of guilt for doing something fun. By the time I got to the museum I had completely changed my outlook on the world. As I saw all the people around me on the train, performers in the train station, urban bike-riders risking their lives on the daily trip home from work, I realized that I had reduced my world to a little bubble that surrounded only me and rarely floated outside of the school. For me, that is one of the wonderful things about art. It opens a whole new world to me and is a catalyst for me to consider how my own world fits into a much larger one.

Okay, I want to tell you about a few more paintings at this exhibit. First, another medical one: 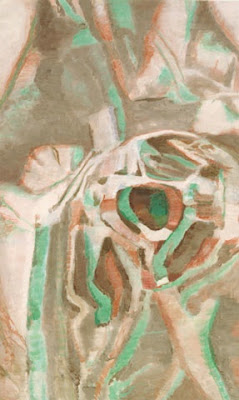 The title of this painting is Lungs, and the placard states that it is an obscure view that most people would not recognize, since it is taken from the right side of the left lung, pressed up against the heart. Of course, if you are like me and happen to be studying anatomy you will be proud to recognize the main parts of the hilum: the bronchi, the pulmonary arteries and veins.... But then you might also miss the chance to think about the fact that Tuymans is a serious smoker. He says it is a part of his creative process and has no interest in quitting, but he certainly knows the damage he is doing to his own lungs.

Many of his paintings make striking political statements, from the concentration camps in Germany, Belgian Congo (Tuymans is Belgian), and the KKK, to Walt Disney, U.S. domestic idealism, and Condoleeza Rice. One of my favorites demonstrates a more intellectual aspect of his art that literally is completely unseen. In fact, I would have missed out on it all together if I hadn't been eavesdropping on a tour. 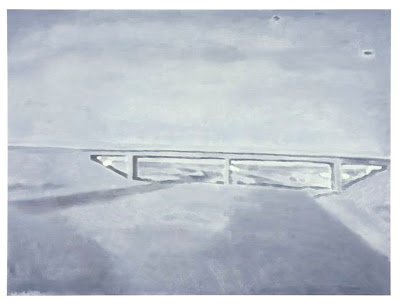 The title is Bridge. What makes it so fantastic is that it is a painting of a bridge in Baghdad, based on a photograph, which was a snapshot of a YouTube video, filmed and posted by a U.S. soldier in Baghdad.

This is the first full U.S. exhibit of Tuymans' works. If you have the chance to see any of his paintings, I highly recommend it. I am sure they will inspire much contemplation. If you are in the Chicago area, the MCA is free on Tuesdays! And, as always, I would love to hear what you think about it all.