I have decided that the hands are the most intimate part of the body. I am getting to know an old man's hands very well. He is (or, was) eighty-three years old and his hands are large, the hands of a man who has used them for many years. I am getting to know these hands so very well, beneath the skin, discovering what makes them tremble or sends blood through the arteries or causes the hairs of the dorsum to stand on end. But that is all I will learn about these hands. They are the hands of my cadaver, so I can only wonder about the rest. I find myself occasionally holding his hand to reposition his arm, as if it were that of a living person, and I wonder who the last person was to hold it before me.
As I migrate through the lab, studying the bodies my classmates have been assigned to, I am not impressed by the faces nor the genitals of the cadavers. The hands carry more meaning to me. One woman has fake nails, painted barbie-doll-pink.
I picture the hands of people who have been important in my life -
my mother's precise hands that bring instant comfort with their touch;
my father's wide knuckles, that I inherited, and that can tickle so well;
my husband's careful hands with long nails for strumming nylon strings;
his grandmother's hands that were crippled from arthritis but perfect for stroking a cat's head;
my friend's talking hands that are excited about life and spread their wanderlust. 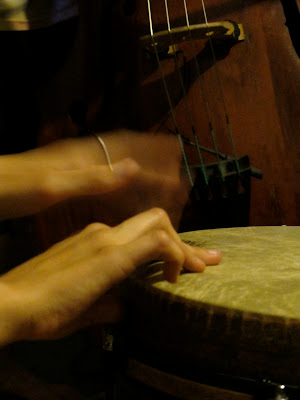 I also remember the hand of a man in the ER that had gotten caught in a corn mill. As he revealed it to the doctor, holding it with his opposite hand, lest the finger completely fall away without the supporting bandage, the man stared at it in awe, wondering if this destroyed appendage was really his own.
I remember the hand of a woman who came to the ER that, despite the IV in the same arm pumping in man's greatest attempt at a miracle, despite the hands of a nurse crushing her sternum, forcing the blood to circulate through her body, fell limp. Even when we all admitted she was dead, I was oddly captivated by her slender, beautiful hand. I wanted to hold it, but did not.
I can understand why people believe their fortune can be seen in their palms. Those dermatoglyphs are indeed unique, formed in the womb, a product of epigenetics.
I look at my own hands and I see an old scar from playing hide-and-seek, another that will soon fade because it's young, because I'm always running into things, nails that are smooth but will never hold nail polish for more than an hour without chipping. A new freckle. A broken pinky, recalcified. These hands take a scalpel and peel back the skin of another's, with the hope that one day soon these hands will heal. 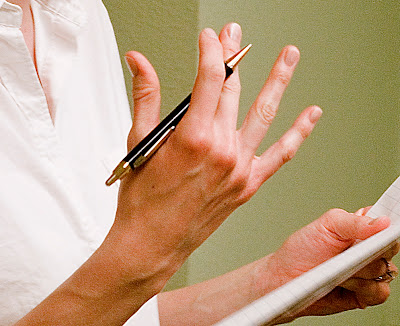