I must admit, I am a bit of a sucker for chick flicks. Not so much the goofy ones, but the pretty, tragically-romantic ones. Like City of Angels. Read this:

Isn't that beautiful? Well, at the very least it's gotta make you want to eat a pear. Here is a really good way to eat one.

Slice the pear thinly, top it with ricotta, a small handful of walnuts, and drizzle syrup on top. 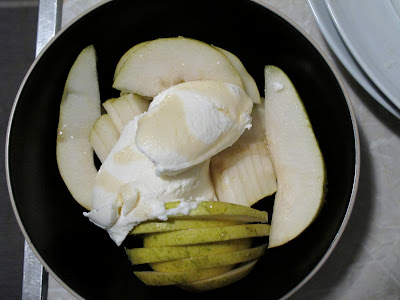 That's all. It's so simple I can't even call it a recipe. I like to eat this as a dessert. If the pears have been in the refrigerator, the combination of cold and creamy satisfies all my ice cream cravings, with health benefits to boot. One pear has 6 grams of fiber, including pectin which helps to lower LDL ("bad") cholesterol. It also has a good amount of Vitamin C and Potassium.

In case you are wondering what the deal is with this crazy flavored syrup. It is made by Jo Snow Syrups. Jo Snow was started by Melissa Yen, who wanted more interesting syrups for her coffees and teas. For a while I was hesitant about buying any of these interesting syrups, uncertain of what I might do with them. Finally I broke down and bought fig vanilla black pepper. Yum, right? I didn't know what I would do with it but I knew that I would figure it out somehow. I read about using it on popcorn, to make a sort of kettle corn imitation - it was even better than I expected. 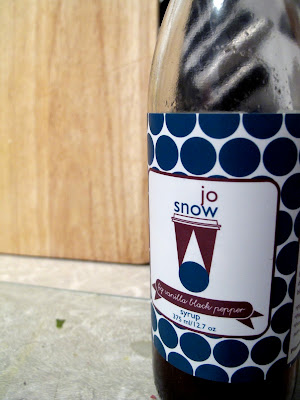 I haven't gotten too creative with it yet, in fact, I haven't even tried it in tea. But I have come up with one really nice, simple dish. If you don't have an awesome cheese market selling these syrups, you can order one from their website and check out all the other amazing flavor combinations. You could also use honey, but it won't be as interesting.