I really love the way the spanish talk about knowing a city. One evening in Valencia we told our Spanish host family of plans to visit Barcelona. They asked, "¿Conoces a Barcelona?" Ian began to reply by saying that of course we know of Barcelona. But that was not the question. The question was whether of not we know Barcelona, like you know a person. I really love using this form of the verb to know (conocer rather than saber) when talking about cities. I also love the idea that you have to spend some time in a place to really know it. German is similar (kennen rather than wissen). I imagine many languages are.

I really love getting to know a city, and when I travel I would much rather get a feel for a single city than see many places scattered throughout a larger region. The memories that really stick with me of previous trips are  little things that really gave me a feeling for the culture - hours spent drinking sangria and talking in a smokey Madrid piano bar, the smell of jasmine growing on old stone walls, getting a single scoop of gelato at the same place every day, strolling aimlessly through winding streets...

Over spring break (isn't it nice that they still give us spring break in medical school?) I did a lot of building on my relationship with Chicago. That fact that I had an amazing friend to share it all with made it so much better. We spent each day in a different neighborhood, appreciating how each was so different from the next and how they all interdigitated. This is something I really like about Chicago: you can walk two blocks and feel like you are in a totally different city, if not another country. Like the night when we met some friends for Latin jazz and Cuban tapas, and shortly thereafter found ourselves debating whether or not to penetrate a crowd of hipsters to listen to an Israeli band at the Empty Bottle. Or when we watched the U.S. premiere of a breath-taking Hungarian film, or spoke to Spaniards on the street and drank sangria and ate calamares, or visited the Mexican Fine Arts Museum... My favorite area of the week was probably Lincoln Park, with its great resale shops, quirky boutiques, and sandwich/coffee houses with names like The Bourgeois Pig. It was a delight to find a Frenche creperie with two middle-aged, flannel-wearing men sharing a bottle of white wine with their weekday lunch. 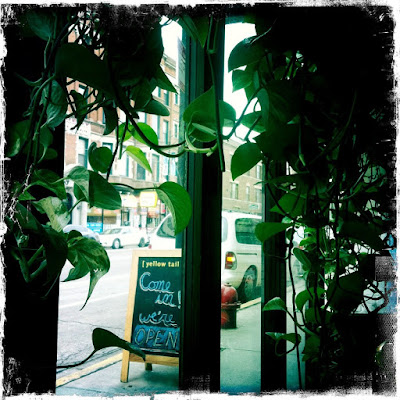 Here are a few more pictures of our week. All courtesy of MJ.

Email ThisBlogThis!Share to TwitterShare to FacebookShare to Pinterest
Labels: chicago, my life, travel