This is Rembrandt's Anatomy Lesson of Dr. Tulp: 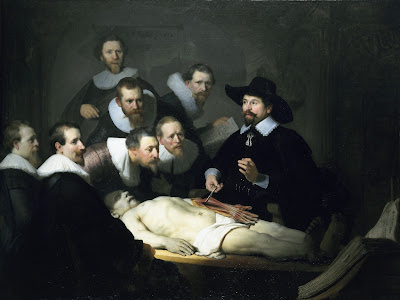 It pictures many of the things we expect to see in such a painting: men with beards, exquisitely dressed, huddling around a dead body in a dark room, intently listening to Dr. Tulp. The instructor is demonstrating how when he pulls on the flexor digitorum muscles it will cause the fingers to curl, and he is mimicking this action with his own hand at the same time. This is something I found myself doing repeatedly as a student of anatomy. Moving my own body that is, in order to picture how the inanimate muscles would function. Sometimes I even tried to imagine staring down at myself lying on that table,  in order to keep right and left in their appropriate places. So, are we using ourselves to understand that body and science, or are we using science to understand ourselves?

It is interesting to note that the men are not looking at the cadaver, but just beyond his feet, perhaps at an anatomical atlas. Rembrandt alone is focused on the body of the dead man and the shadow of death cast over his eyes. A little bit of research will reveal that the cadaver is a criminal that has been recently executed for multiple charges of theft. This may explain why it is his hand that has been dissected first. In those days the guts were usually removed first to get the gross part over with before it really started to decay. Today we start with the back, where amateur medical students are less likely to slice through arteries, nerves, and tendons that must be preserved and studied.

The dissected hand also appears to be quite out of proportion, larger than the right hand. And there is an anatomical mistake - the muscles in the painting originate on the lateral epicondyle, but they should originate on the medial (the side of the elbow nearest the torso). We certainly don't want to assume that this was actually a mistake. Rembrandt was a meticulous artist and he was likely in that room himself.  In his lecture "Observing Reason: Critique of Scientific Stance", J.M. Bernstein of the New School for Social Research suggests that Rembrandt purposely drew the faulty anatomical details based on the illustration of the opposite hand in the atlas these other men are looking at. He further proposes that this illustrates how science attempts to understand our world and, therefore, ourselves. I must admit that at some point I find it difficult to follow what Bernstein is saying because I am not familiar with Hegel's Phenomenology of Spirit. Nonetheless, he raises a point that we can all think about. Perhaps the fact that we get caught up in this anatomical error further emphasizes what Rembrandt wanted to show us. The men in the painting see the atlas, the instructor sees the mechanics behind the movement, we see the dissected right arm, but nobody sees a man who has just died.