I decided to try growing my own sprouts for the first time. Well, I guess it's not actually my first time, but I don't count the second grade science experiment because we didn't eat those sprouts. From what I've read, it's very simple. You just place the seeds in a glass jar with holes poked into the lid, soak them in water for the first night, then rinse and drain twice daily and keep in a dark place until they ahve fully sprouted. I bought a mixture which has a few varieties that will put out small leaves. The package says to place them in the sun for a few hours to allow a good green color to develop. I began with about one tablespoon of seeds, and you can see  how much they have grown in two days. I am hoping for a delicious salad in a few more days! 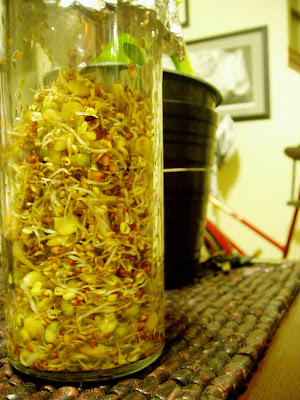 What I really want to tell you about is a lasagna I made recently. I didn't take any photographs because I wasn't planning on posting anything. That's because I used a canned sauce and I am not sure how many stores carry it. It's a butternut squash pasta sauce from Dave's Gourmet. If you want to try making your own sauce or using another similar product you should know that this one has a very strong red pepper flavor that was a major inspiration for, and an integral part of this dish. It turned out so good, and everyone who tried it liked it so much, that I decided it was worth sharing. Even if you usually favor white pasta over whole wheat, I would definitely recommend using spelt or whole wheat, which will hold up well with all the strong flavors.

Salt each side of the eggplant and let sit for up to 1 hour.
Bring a large pot of water to a boil, add a good-sized pinch of salt and cook the noodles until al dente.
Meanwhile, thinly coat a 9x13 inch casserole dish with olive oil.
Mince the garlic or use a garlic press and add it to the rest of the olive oil in a small dish.
Use a pastry brush to add the olive oil and garlic mixture to each side of the zucchini
Lay them out onto a large baking sheet and place about 5 inches underneath the broiler for 5 minutes.
Remove and set zucchini aside on a plate.
In the same manner, brush each side of the eggplant and place under the broiler.
Cook until they begin to brown, flipping over once, about 10 minutes total.

Once the vegetables are done and the pasta is also cooked and drained, begin to layer everything in the casserole dish, cutting noodles and vegetables as needed to make everything fit nicely:
Begin with the noodles.
Follow by a good layer of sauce, salt and pepper, all of the eggplant, one third of the feta, and one third of the parsley.
Add the second layer of noodles, perpendicular to the first.
Repeat sauce and S & P, all of the zucchini, another third each of the feta and parsley.
Add the final layer of noodles (I ended up with one strip left over).
Top with sauce and the rest of the feta.
Bake at 400°F for 20-30 minutes, until the sauce begins to bubble. (The cheese won't really melt much).
Garnish with remaining parsley and serve.